It is hard to believe that this summer is already coming to an end, especially when there is so much more traveling that we want to do! For those of us who can’t fly off to a far away place on a whim, here are a few virtual tours at some of the world’s cultural icons. 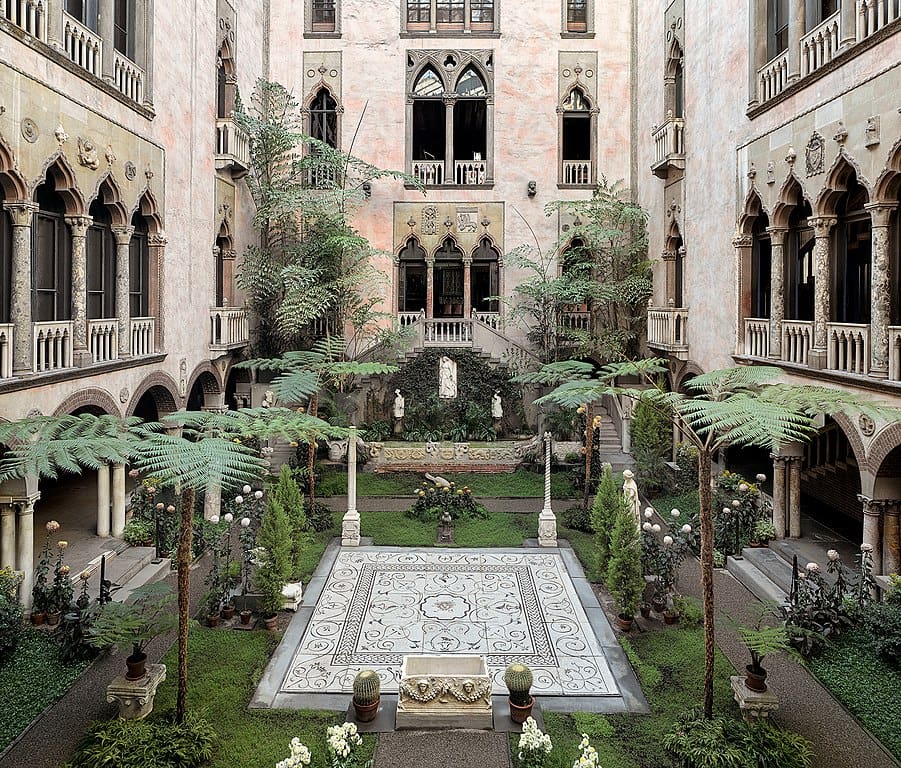 American philanthropist Isabella Stewart Gardner (1840–1924) acquired a vast collection of fine and decorative arts on her travels throughout the world. She built a palatial museum to house her collection in Boston in 1901, occupying a residence on the fourth floor.

A stunning garden courtyard sits at the center of the building, allowing light to filter in through the windows of the upper floors. Gardner placed a number of figurative artworks on display in the garden. Although her motivation for this is unknown, it is interesting to note that all of the figures are female.

The Veronese Room’s opulent décor is a treat for the senses. Gardner commissioned gilded panels from Milan to surround a large 15th century painting (formerly attributed to the Italian Renaissance painter Veronese) in the center of the ceiling. The walls are lined with stamped leather panels from the Netherlands, Italy, and Spain. The eclectic display includes fine china, European furnishings, and pastels by James McNeill Whistler.

Empty frames hang on the walls of the Dutch Room on the second floor. They are a testament to the most famous art heist of all time: in 1990, intruders cut thirteen of the Gardner Museum’s paintings from their frames and made off with them, never to be seen again. Six paintings were stolen from the Dutch Room–five Rembrandts and a Vermeer.

Gardner was an active patron of the arts, holding exhibitions, concerts, and lectures. She sat for a portrait by John Singer Sargent in 1888, which can be seen in the corner of the Gothic Room, a part of her private quarters during her lifetime. The Gardner Museum notes that due to its placement “surrounded by altarpieces, stained glass, and religious statuary, the sacramental quality noted by nineteenth-century reviewers is even more pronounced.” 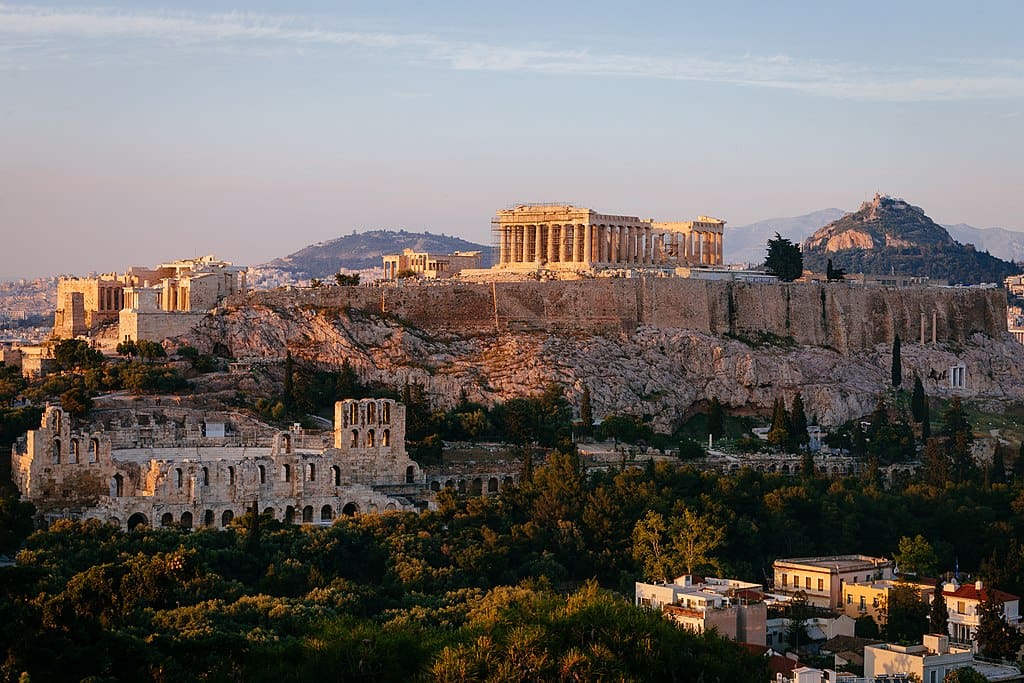 The Athenian Acropolis is built on a tall, flat hill rising high above today’s modern landscape. Steeped in mythology, this site has been inhabited for thousands of years. It has served many purposes over time, including a citadel for ancient Athens and a location for religious ceremonies and celebrations. Its legendary architecture is among the greatest treasures of the ancient world.

It is a long walk from the city street to the top of the hill. After emerging from the trees, the first structure you encounter is the Temple of Athena Nike. This tiny building was completely disassembled and rebuilt as part of an intensive restoration project. The bright white marble used in the restoration is the same kind that was used in the buildings’ construction—the original stone has darkened due to exposure to pollution and other environmental factors.

The Erechtheion is a temple that was (probably) named for an ancient hero. It once contained a sea-water cistern that was described in the 2nd century B.C. by Pausanias as “remarkable for the noise of waves it sends forth when a south wind blows.”

On the south side of the building is the Porch of the Maidens with its famous caryatids, or support columns, sculpted to look like women. (These ones are actually replacements—one was infamously removed by Lord Elgin and placed in the British Museum; the other five reside nearby in the Acropolis Museum, protected from the elements.)

This view from the tour shows the restoration of the Parthenon, the most famous temple from ancient Greece. The Parthenon served as the treasury for Athens and as a temple to the goddess Athena. From this remarkable angle, the modern equipment contrasts poignantly against the marble columns.

In September of 2013, Galerie Itinerrance in Paris’ 13th district invited 80 international artists to turn a condemned 10-story building into a street art project. The building was demolished at the close of the exhibition, but Google Arts and Culture was able to capture the finished project.

This immersive (and sometimes claustrophobic!) artistic collaboration is a maze of the weird and the wonderful. Strange animals occupy the walls of crumbling rooms and peer around corners. Oversized humanoid figures fill entire walls. Sculptural pieces mimic architecture in unexpected ways.

The creativity of artists never fails to delight. Windows, fixtures, and even wall mirrors were incorporated into much of the work in Tower 13. The convergence of so many different styles of street art is a rarity, given the amount of space required for a collaboration of this magnitude. During its brief existence, the Tower 13 project stood as a monument to the gallerists who brought the exhibition together.

We hope these virtual tours have inspired you to look at more artwork. Here are more tours from other museums that we think you’ll like, and of course, we have our very own!