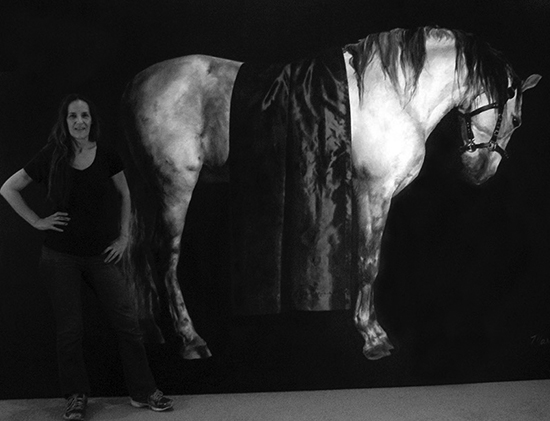 “I consider my work to be portraiture, although not in the traditional sense of the term. As a child I would sit for hours, repeatedly drawing a horse’s head, in what I remember to be a kind of frustrated pose, his nostrils flaring and mouth open. I had no exposure to real horses at that time, and have long since thought that it came from some deep-seated subconscious source that, to this day, I still have not completely decoded. Like so many young girls, I managed to extrapolate riding lessons from my family, (in my case, my grandmother Marian), and eventually owned two fiery, somewhat misfit horses, both being a sort of manifestation of the image I had engrained in my mind from when I drew them as a young girl.

As a young woman, I originally pursued my bachelor’s degree in Animal Science, choosing Colorado State University for its exceptional pre-veterinary program. However, before the completion of my freshman year, I submitted my portfolio to the art department and found my way back to the artistic process. The horse was a consistent subject for me, as were figures and architecture. My first architectural drawings were the result of trips I took as a teenager when I packed up my drawing materials and headed out into the neighborhood, drawing the houses with the most dramatic lines and dark shadows. As an art student my love of value, contrast, and drawing soon led me to printmaking, and although I earned my bachelor’s in painting, in my late twenties I returned to CSU to pursue my MFA as a printmaker, to study lithography. While in graduate school, my imagery remained fixated around exploring that same nagging image I had in my head of the energetic, frustrated horse, but interrupted with trips into the city to draw the architecture and people.

After weathering two years as a printmaker in the characteristically subjective and uncompromising MFA program, I was forced to address the evidence that I needed to work in a medium exponentially more direct than the multiple chemical processes of those required for lithographic prints. With the support of the department chair, I was granted the department’s first interdisciplinary move and transferred my focus to painting, graduating as a painter but maintaining a strong emphasis on lithographic printmaking.

In the 20 years since and as I fight, as all artists seem to, to develop the evolution of my imagery, both the horses and the urban drawings continue to wage battle against each other for my attention and time. While one may gain ground for weeks or even months at a time, stealing all my love and attention, the other always returns with a renewed life, forcing the other its turn at silence.

I suppose I need one as much as the other; when I have become saturated and drained from the mental rigidity and focus required of the horses, I long for the playful release, of the immediacy of the drawings.”