Hyunmee Lee’s new series is all about creating and expressing the essence of calligraphy in her own gestural style. Take a look inside her studio and hear a little bit about about her practice, inspiration, and intentions with her most recent work. 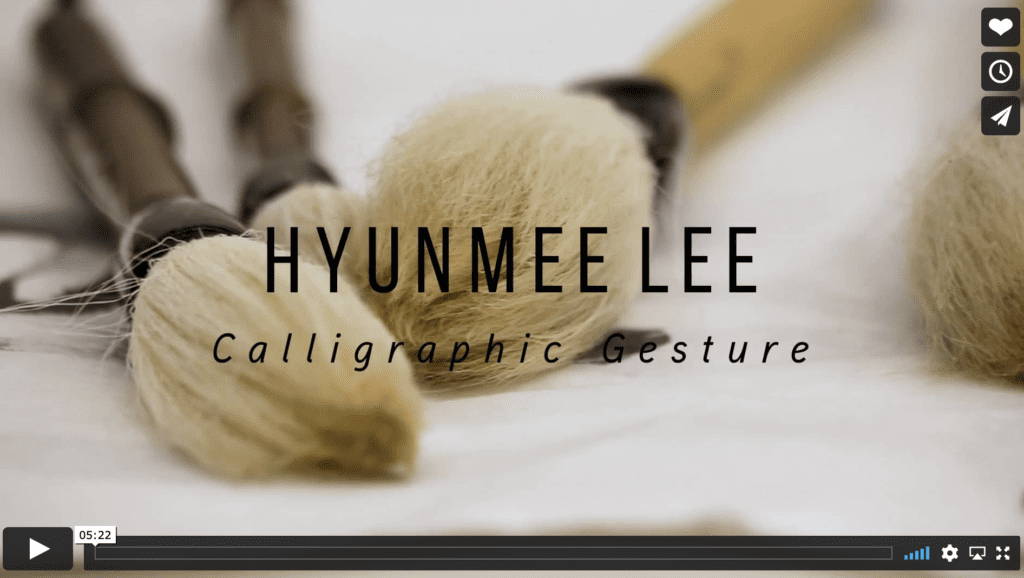 Lee originally learned the art of calligraphy from her father and grandfather who were both calligraphy masters. When she was young, her family held Confucian ceremonies in their home; when the ceremony began, everyone would watch her father write calligraphy on Korean rice paper, followed by reading and chanting, and finally burning the paper. This ceremonial process of using calligraphy is an important inspiration in Lee’s current body of work.

Lee grew up in Seoul, South Korea eight years after the Korean War. She describes her environment as very monochromatic, leading her to make work that tends to to be black and white with neutral tones and minimal color. In her early years as an artist, Lee made traditional representational work. Feeling that that type of art was too restrictive, she began working in abstraction at the age of 22. Since then she has used freestyle brushstrokes which she calls “meditative gestures” to connect the art of calligraphy with gestural movement.

THE ESSENCE OF CALLIGRAPHY

Lee hopes to create her own organic gestures, moving away from traditional calligraphy and recreating it in her own style. Through practicing and working to learn and deconstruct traditions, she has found a way to make something that is all her own.